Summit for the Weekend? – I think I will ! Hello Knocklayde

With only 2 weekends until the “Dander for Dosh” Mr Clark an yiourse truely descided that it was a perfect time to have a go at Knocklyade. Now for those that don’t know Knocklayde is a 1695 ft  hill above Ballycastle on the north Antrim coast and right on the top is Carn na Truagh (The Carin of the Sorrows) and it was with the aim of having lunch on that very cairn that Andy and I set out from Ballycastle Diamond at 8:30 Sunday morning. From our starting point it was going to be a 8 mile slog up and down this rather soggy key piece of the north coast’s up and downy-ness

Taking the Fairhill road that leads out of the diamond beside the Antrim Arms Hotel we followed the signs for the Moyle/Ulster way for 5 miles up onto the shoulders of Knocklayde. The going was uphill but none to arduous being mainly on forestry tracks.
You will come to a large section of cleared forest and the Moyle/Ulster way veers off to the left and a less trodden path continues along to the end of the cleared section. Follow this path and you will come to a path heading to the right up towards the hill. When you come to gate where the full horror of what lies ahead can be seen for a full 180 degrees.

Hop over the gate and turn left until you get to a sheep fold, then follow the fence/wall up the side of the hill … and that is really about it…… 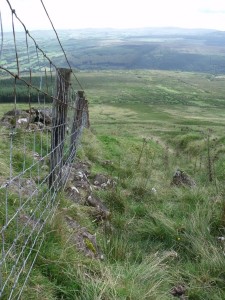 The fench on the way up

It gets really really really steep, there are rocks and holes in the grass (down which a wee stream flows unseen but not unheard so those of you with weakish bladders beware!) My gammy leg did not fair well as each time I push down on my toes a bit of muscle pops out of a fasica hernia and unless I pop it back in things get all tainted with SORE! At one point I was sat waiting for the lump to subside and I thought to myself “no this is just silly” and I was about to phone Andy who had wandered on ahead and tell him to fire away and I would wait for him where I was. A passing sheep stopped looked at me and said “Wuss” in a loud most unsheepish way and then bounded up the hill .. there was no way a fecking sheep was going to best me!! So onwards and upwards i plodded, taking my time and resting frequently. 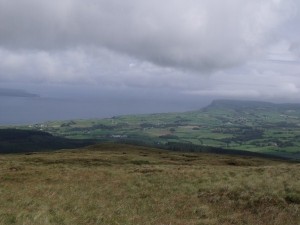 The view from the top

When you get to the top of the fench, all you need to do is climb over it (no barbed wire!!) and turn to the left and 30 yards away is the cairn and you are there. From the top the views are spectacular, 360 degrees of uninterupted loveliness (an no comms masts!!!) from Donegal in the west to Scotland in the east. Truly well worth the unpleasantness (for me) getting there. 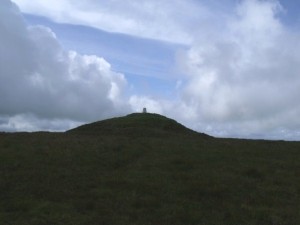 The Carn of the sorrows

A word about the Cairn at the top, Carn na Truagh, this is a very impressive site. This huge hilltop cairn, on the top of Knocklayd Mountain, almost certainly contains a Neolithic passage tomb,(5000 years old) but there are no external signs of an interior structure. It is over 3m tall and about 20m in diameter. Most of the stones that form it are covered by a layer of peat and tough grass, but on the south and west sides the prevailing winds have exposed the stones and a large section of the huge kerb.

Oddly, the kerb is not formed by stones that are set into the ground, but that are lying against the slope of the cairn itself … this site has not be excavated so it remains a mystery and a good place to have a cuppa after that sodding climb!

A great day out!

Piccies can be found here =>

This entry was posted in Walkies. Bookmark the permalink.

One Response to Summit for the Weekend? – I think I will ! Hello Knocklayde