Come on in and tale the weight off your feet, there is beer in the fridge and the nights are pulling in rightly and it will soon be the time for tales to fill the long dark nights of winter.

I dander, I dander a lot, hither and thither over the “top 9” (the 9 counties of the province of Ireland) and in the course of those danders I pass places where the echoes of long ago can still be heard. Such a place is Slaghtaverty 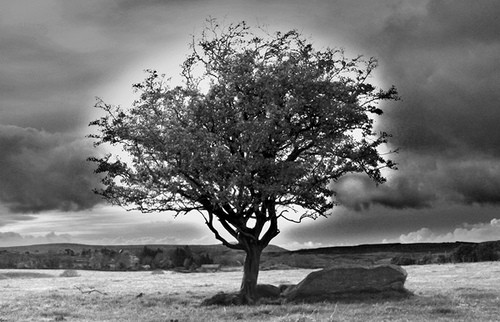 Now this large boulder with a partnered Blackthorn in the middle of a field is not, some would say the most awesome of sights but like many an ordinary thing it has quite an extraordinary tale behind it.

Slaghtaverty lies between south of the village of Garvagh in a townland called Glenullin (the glen of the eagles). It is on the edge of the Sperrin Hills and is one of many ancient stone works that litter the landscape for miles around.

The name  modern name Slaghtaverty is thought to be a derivation of the northern Gaelic Laght Abhartach or “Tomb of the Dwarf”  and how it got to be called that is part of the story.

Back in the dark mists of time the Ireland was divided out into small kingdoms each run by a clan chieftain, these chieftains swore fealty to the Ard Ri, the high king. The area around Glenullin was controlled by a deformed dwarf called simply Abhartach (if you say Avatar would will be pretty close to pronouncing it correctly). He was as mean spirited ,cruel and evil as you like, the rest of his family despised him, the people that lived in Glenullin hated him and it was only his reputation as a master of the dark arts that kept him in power.

Eventually the local townsfolk went to the clan leader of the neighbouring kingdom a brave and heroic man called Cathán. They pleaded their case with such fervour that his heart was moved to help them and he rode straight away to Glenullin and confronted the dwarf Abhartach. The battle was short but fierce, Abhartach summoned demons but Cathán armed with a sword of silver made, it is said, from the silver arm Creidhne made for Nuada the first king of the Tuatha Dé Danann .This magicaly weapon made short work of them and the end came when Cathan slit Abhartach’s throat and let him bleed to death. Cathan buried him were he fell in a remote field on the slopes of the Sperrins. Job done . Cathan returned home confident that the people of Glenullin were now free … or so he thought.

The next day Cathan awoke to find a group of terrified people from Glenullin gathered in his courtyard with worrying news. The previous evening as the sun set, Abhartach rose from the grave and rampaged through the village, catching two women and draining them of their blood so as to replace his own. However the stolen blood soon leaked out of the slit throat and it was only the coming of the sun that stopped the monster and he returned to the grave.

Cathan disbelieving this tale went to the grave and sure enough there he found the ground all disturbed, the sods he had so carefully replaced cast hither and thither. He sat and waited and as the sun fell, the long spindly fingers of the dwarf dug their way clear of the earth and it hauled itself up in the cool night air.

It is said he screamed such a scream that would turn your hair white when he saw Cathan and his sword waiting for him. Once again Cathan prevailed and the monster was returned to a grave dug deeper this time and the body placed vertically which is a sure fire way to keep a body from wandering from its final resting place.

A week or more passed and once again the people of Glenullin appeared at Cathan’s door. Abhartach was back and 3 more people had had their blood drained! So Cathan consulted with the local druids on how to deal with this neamh mairbh or Walking dead and once again he waited next to the grave for the dwarf to appear.

It was after midnight when the grave opened and the deformed corpse of Abhartach appeared screaming with rage and thirst for the blood than no longer coursed through his veins. This time the battle was fearsome and although grievously wounded Cathan prevailed and taking the advice of the druids decapitated the corpse, burned the head and buried the corpse neck down vertically in the grave. The next day he and his men got a massive boulder and placed it on top of the grave and a druid planted a sacred blackthorn bush whose deep roots would grip the corpse and hold it in place.

Abhartach never again appeared to drink the blood of the people of Glenullin and the now ancient Blackthorn and massive boulder still exist in the lonely field on the slopes of the Sperrins and few if any locals would ever think of disturbing it.

…..
As a footnote to this tale some think that Bram Stoker, a Dubliner Civil Servant came across this tale in a collection of stories laid down by a Mythographer Patrick Joyce some 30 years before the publication of Dracula and he may have used it as the basis for the blood sucking Nemesis of his classic tale … and there you have it a tale for Thursday 🙂

This entry was posted in Blogging, Steve. Bookmark the permalink.