The Global recession and its affects on the Intergluteal Cleft

It is a sad indictment of the state we find ourselves living in that the cut backs and fiscal penny pinching has reached such a proportion that it has reached into the very private inner sanctum of silent contemplation that is the “loo”. There are less fragrant de-odourising agents. Whereas at the height of yuppiedom we were treated to the light and subtle tones of a Tuscan Spring Morning after a light dew as the calendula open their yellow heads to point at the Mediterranean sun now we get Wet Sunday afternoon in a cardboard box that smells more that slightly of pee.  Similarly the soap that would both cleanse and moisturize ones hands as you ablute has now morphed into solidified lumps of weak carbolic acid that remove the top two layers of skin if not washed off directly after application.

Most worryingly is the change to cheap toilet paper!

The care of one’s posterior is something that should never be shirked, should never be held up to the vagaries, and profit and loss spreadsheets of those that control the “spend”. Alas it seems we have reached a point where this is indeed the case 🙁

So it was that this email was crafted to ensure that the powers that be were made fully aware of the situation vis a vis the collective corporate posterior. 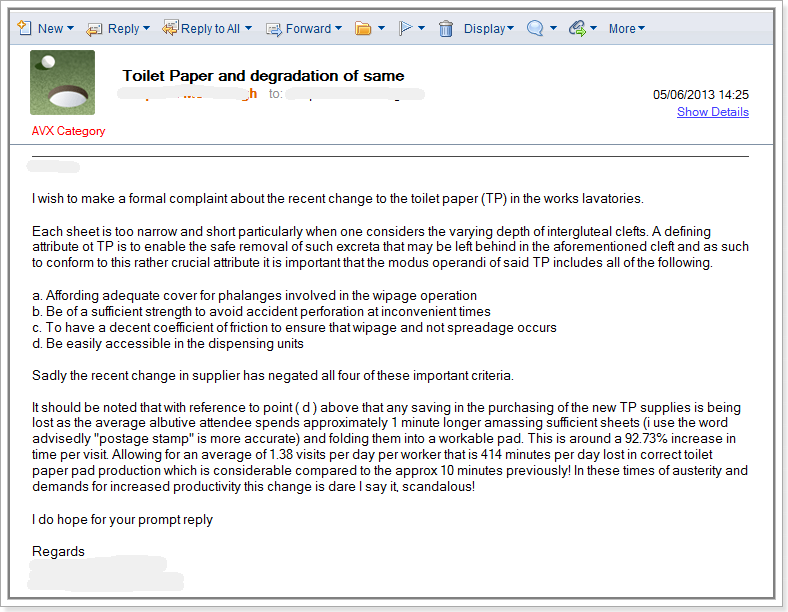 This entry was posted in Blogging, Old Git Wisdom. Bookmark the permalink.