.o0( Love knows not its own depth until the hour of separation. ) 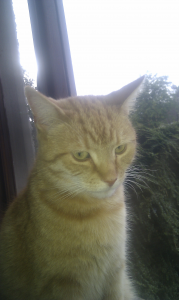 Today was a day of an ending – The last “t” was crossed the last “i” dotted and a big tear stained full stop was placed at the end of the last sentence of the last paragraph of the life of Fizz McDonagh. 🙁 It seems that some time last night he went for a doze under a hedge as he was wont to do and had a heart attack or stoke and died … we found him this morning.

Every life is a story and stories suffer if not told.

The McDonaghs of number 14 have always had cats, in fact the day #14 was built and handed over to myself and Val we were only able to take up residence when the imperious and some what circumferentially gifted “Muffin” gave her seal of approval. Years and indeed decades passed as did Muffin, Jade and then Amber. After each kitty funeral the house felt empty and the absence of a purring furry mass of barely suppressed feline frustration at meal times was sorely felt … and this was the reason Fizz and his litter sister Kizz joined the family.

They were rescue cats and had a pretty poor start in life as they were found just 3 weeks old, in a sodden cardboard box in the middle of a busy road. I would like to think by mistake, but knowing human nature is sometimes less than pleasant than we would admit. , I have a feeling the location was chosen to achieve the result of killing the kittens. They were cold wet and close to making an exit from life before they had had a decent shake of the stick.

Val, Niall and I were cat less at the time and on an impulse driven by that need that all cat owners get when deprived of the sort of unconditional love a wee furry person is very good at giving we went to the local animal sanctuary and were introduced to Fizz and Kizz.

Fizz – a ginger Tom – made sure we could see him by climbing the chicken wire of his cage and hanging spread-eagled, Garfield like at Val’s nose level. We had agreed before hand it was going to be “just the one cat” but there was no way we could separate Fizz and Kizz so we left with both.

About 2 weeks after arriving Fizz threw a fever and we whisked him down to the vet and he was diagnosed with Viral Feline Enteroritis. The vet sucked air ‘tween his teeth in the manner of a car mechanic working out exactly how many 0’s that squeaky clutch would cost to repair and told us it might be better to say “goodbye” there and then as the outlook in a kitten so young was very very poor.

Val would have none of that!!

So the Vet told us to take him home and kept him hydrated with an eyedropper every half hour and perhaps in a monumentally enormous massive almost infinitely small turn of good luck he just might be OK.

Val taking on the role of chief nurse,  sat with the poorly wee ginger mite for 36 hours feeding him water and cleaning the mess when minutes later most of what went in  appeared at the other end. But after 36 hours the start of a wee purr could be heard and gradually over the next few hours things improved. Fizz had survived .. and it was all down to the Val’s nursing routine that became known as “lie down, roll over, tickle tummy, close eyes, go sleep” I can heartily recommend it 😉

Mind you it was not without cost. The fever had wrecked havoc in his insides and was as they used to say “Of a delicate disposition in the bowels” so much to his disgust he was not allowed to share in the family curry nights. Similarly the fever was of sufficient ferocity to leave him all but silent apart from his purr and … well there is no way to say this nicely .. render him very very very stupid! Oh and his rear legs were rather wobbly when cornering. Didn’t seem to bother him greatly he just went through life in a fairly constant state of either surprise or confusion while avoiding any activity that required having back legs that worked in sympathy with his front set. 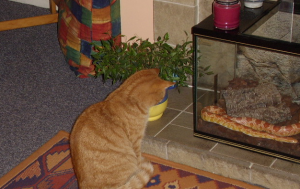 We have a snake called Sunni who is an Amelanistic Sun Glow Corn Snake and was a point of constant confusion for Fizz. He would sit like this watching “Fizz TV” for hours. We think he was convinced it was a tail and was waiting for the other ginger cat to appear …. It never did 🙂 Kizz his sister would watch with the disdain only a female cat can master with an almost visible thought bubble hanging over her head that read

… and so I sit here missing the big ginger cat that slept on our bed, got me up when he felt breakfast was a bit late, purred like mad when you tickled that bit behind his ears ….

Why the F**K do we do this? Why do we let these creatures come into our lives sure in the knowledge that someday we will feel this sharp hot pain of separation?

Yet … I do not believe, even for a moment, that we will never get another. I know full well that there are just too many animals out there in need of a home. If Val and I were to take  the rather self-indulgent road of saying the heartbreak of the loss of a furry family member is too much ever to want to go through with it again … well …  such an admission would mean that all the wonderful times you have with your pets over the years are not worth the unhappiness at the end and sorry for being blunt but that is a crock of shit!

I will sign off now as it is difficult to see the screen properly when my eyes are full of tears that need to fall. I will leave with this thought from the diaries of my hero Leonardo Da Vinci “The smallest feline is a masterpiece” and he more than anyone would know!

RIP Fizz McDonagh – like myself a bit of a flawed masterpiece

This entry was posted in Blogging. Bookmark the permalink.