I was all set to do some serious off road, map an compass work up the Glenshane Pass this Sunday but alas the Norn Iron Weather let me down big time when I got up. Blowing a gale and pissing like there would be no tomoorow. Having crawled ou of bed at 7:30 it seemed a pity to waste the day so I had a dig in my “I want to do that one” list and came across a wee 6.5 mile dander mostly on tracks up Carntogher Mountain in South Derry not that far as the crow flies from Glenshane.

Carntogher in Irish is “Carn Tochair” or “Cairn of The Causeway” The causeway in question is not the Giant’s Causeway but may be the one mentioned in Táin Bó Cuailnge. Conchobar, King of Ulster, sends his son throughout the kingdom to rouse the warriors to battle. He passed across a causeway before arriving in the valley of Dungiven on the night of the The Festival of Lughnasa assembly on Carntogher. Lughnasa was a big festival in the days of long ago, loads of drinking and dancing and other sorts of interesting carry on.

At 464m Carntogher is the 569th highest summit in Ireland so there!

So how to get there? The car park at the start is on the Tirkane Road just outside Maghera. There is in fact a “History Trail” all the way from Maghera up to Carntogher and back, however today was not the day for that dander as it really was very very wet and windy! 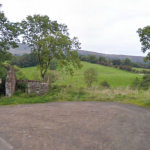 It is a nice we car park with room for 4 or 5 cars but oddly no rubbish bin so remember to take you shit home with you and not leave it lying for the next walked to find like I did this morning 🙁 walk out of the car park turn right and follow the road up for about 600 yards. Just past the second bridge you will come to a post pointing up the hill over the fields.

There are actually 2 tracks colour coded Blue and Red and they follow the same route at the start. Follow the path up the hill.There are decent way mark posts the whole way up. About a mile in you come to a stony track. This used to be the coach route to Dungiven and Derry, but more of that later. Turn to follow the track upwards and eventually you will come to two sites of interest a the top of the mountain. 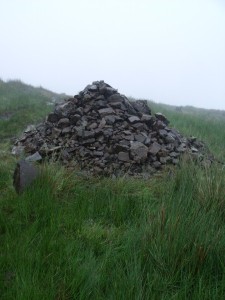 The Emigrant’s Cairn, during the late 18th and 19th centuries there were many waves of emigration out of rural Ireland to the new world. Northern Ireland was not exception and the port of embarkation was Londonderry/Derry. For the folk in central Ulster heading to Derry the coach route came up and over Carntogher and as they passed the summit they would leave a stone on the cairn to make their passing. The cairn is still there and although I was not leaving the province I reseated a few of the stones that had fallen off just in case any on my American friends great great grandparents had passed this way in years gone by. 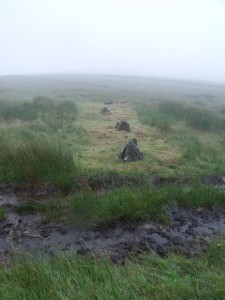 Just below the Cairn, a series of rocks called locally Shane’s Leaps lie just off the path – four innocuous-looking rocks. Did Shane ‘Crossagh’ O’Mullan, the light-footed highwayman with the scarred face whom all the ladies sighed for (a sort of George Clooney of his day)  once escape the lumbering English soldiery up here by jumping over the bog using these stones as steps? Who knows 😉

The track became somewhat muddier above the cairn due to the fecking driving rain which was coming doing in BUCKETS at this time which made the going tougher.  On reaching the Emigrant’s cairn you turn right to ascend the last steep rocky section up to the 464m summit. This part of the hill is known locally as ‘the Snout’. There are drainage ditches everywhere on the summit which were all full of water and some are 3-4 feet deep! You have been warned What with the wind and the rain I couldn’t see a thing more than 10 feet away but i am told I from the summit you have a 360 degree panorama most of Northern Ireland should be visible – 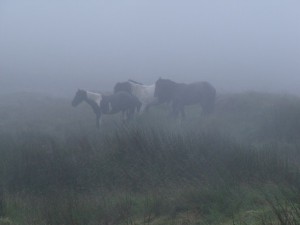 Horses in the Mist

the Antrim hills, Lough Neagh, the Belfast hills, the Mournes, the Donegal hills and the higher Sperrins even over to the hills of Islay in Scotland, needless to say I could see none of this. However I was treated to a glimpse all be it fleeting of some mountain ponies in the mist and rain.

Just below the cairn is a sign pointing right and quickly you pick up a path that goes through some peat cuttings. If it is raining or has been raining watch out it is really soggy!
Half a mile later the track veers left and there is no way post, don’t follow the track instead keep going straight on and in a 100 yards you will pick up another path which in turn leads to another stone track leading down of the mountain. Follow it down and you will pass the remains of a bronze age cist grave.

On a good day it would have a fantastic view over the valley below. Not a bad place to spend eternity!

It is well worth following the route on the map to the Knockoniell court grave which is to say the least spectacular! 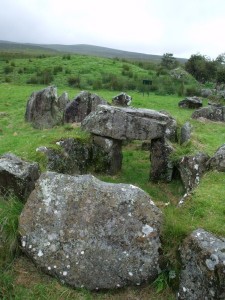 It is a Court grave from the late stone age some 5500-6000 years ago which was then added to in the Bronze age some 2000 years later.It is worthy of note that although it now looks like a mini stone henge, it was until denuded of it’s covering a Cairn c in earth and stones! The cap stone and slab you can see in the picture each weighs several tons so it was a work not undertaken lightly. We can only imagine who was buried there and what deeds they did to deserve such a feat of engineering 1000 years before the pyramids of Giza were built

All in all this is a grand wee walk, 6.5 miles in all with a bit of a slog up to the summit and an easy wander down. I will definitely be doing it again in better weather!. More pictures can be found here

This entry was posted in Blogging, Walkies. Bookmark the permalink.

One Response to The Carntogher Trail